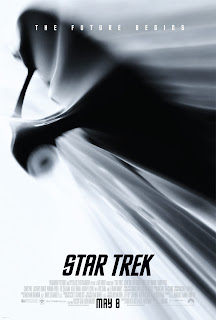 According to Variety, JJ Abrams has already signed-on to helm the sequel to the yet to be released Star Trek relaunch. The sequel is being scribed by Lost co-creator, Damon Lindelof, as well as Alex Kurtzman and Roberto Orci of Fringe.

Fringe was co-created by Abrams and Orci and Kurtzman worked on the Star Trek relaunch - the premiere of which is mere weeks away! Orci, Lindelof, and Kurtzman are also working on another flick called Aliens and Cowboys (which I must admit, sounds so goofy on the one hand, but really cool on the other). The Star Trek sequel is looking for a 2011 release.

The trio said they are hoping to "explore some incredibly exciting things" with the sequel, as "the first movie has to be about origin." But they added they are waiting to see how fans react next month. Those are my italics because, well... just the state of the industry, you know? IOW, they aren't waiting to see if the release is a success, they're just waiting to see how people react so they have a better idea of where to go - to ensure financial success. I know it's showbusiness, but with such practices, it's hard not to be cynical.

The image is the final theatrical poster in hi-res. The Rundown is an official Star Trek blog.

If this trend should continue, then we can look forward to watching the sequels before the first movie is even released and then they start re-imagining movies that were never actually made which would give us an illusion of originality. That would be a refreshing change of pace.

Has every creator in mainstream entertainment just given up? I mean, every story had already been told back in Shakespeare's time, but he still gave it ye olde collegiate try.

However, if he had to ensure backers all his plays had a trilogy in them, as well as merchandising options and a suitable theme park ride... theme, who knows what could have happened?